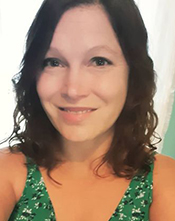 My current research centers on Indigenous poet and writer Simon J. Ortiz (Acoma Pubelo) in particular, and on representations of reservation border towns more generally. My essay "Poetry and Protest: Simon J. Ortiz's writings on the reservation border town of Gallup, NM" appeared in the Fall 2019 issue of Interdisciplinary Humanities. I will be presenting a selection from my most recent essay "Simon J. Ortiz and the Power of Recognition" at the American Literature Association's Annual Conference in July 2021.

In my free time, I enjoy reading, crossword puzzles, cards, board games, and-if I'm being completely honest-watching too much TV. I love to explore the natural beauty of the region through camping, mountain biking, hiking, and backpacking.