Dr. Mark Wilson was born on February 14, 1944 in Modesto, California. He attended Washington State University where he finished with a Doctoral Degree in Mathematics in 1972. He assumed the position of Chairperson of the Math and Science Department at UNM-Gallup in 1981 where he instructed for 25 years until he retired in 2007 for health reasons. Dr. Wilson and his wife, Gwen, raised four children and they shared a love of camping, hiking, backpacking, river rafting and domestic and international travel. He enjoyed woodworking, reading and classical music. Dr. Wilson died on October 6, 2014 after a lengthy illness and was honored with a memorial service on October 12, 2014 on the UNM-Gallup campus. 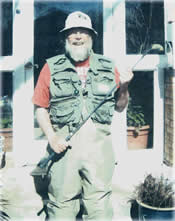 From Claire Yoder, RN, JD: We met Mark while working on the Navajo reservation. 79-81. In a short time he married Gwen and had Brian as we got married also and had our first child Emily. Despite pregnant women on his hands Mark boldly took us on a long hike over rocks and valleys until we could go no further. As the sun was setting he ran for the car to gallantly drive us back. A kind man, always up for adventure we remember him with only love—Claire and Eric Yoder